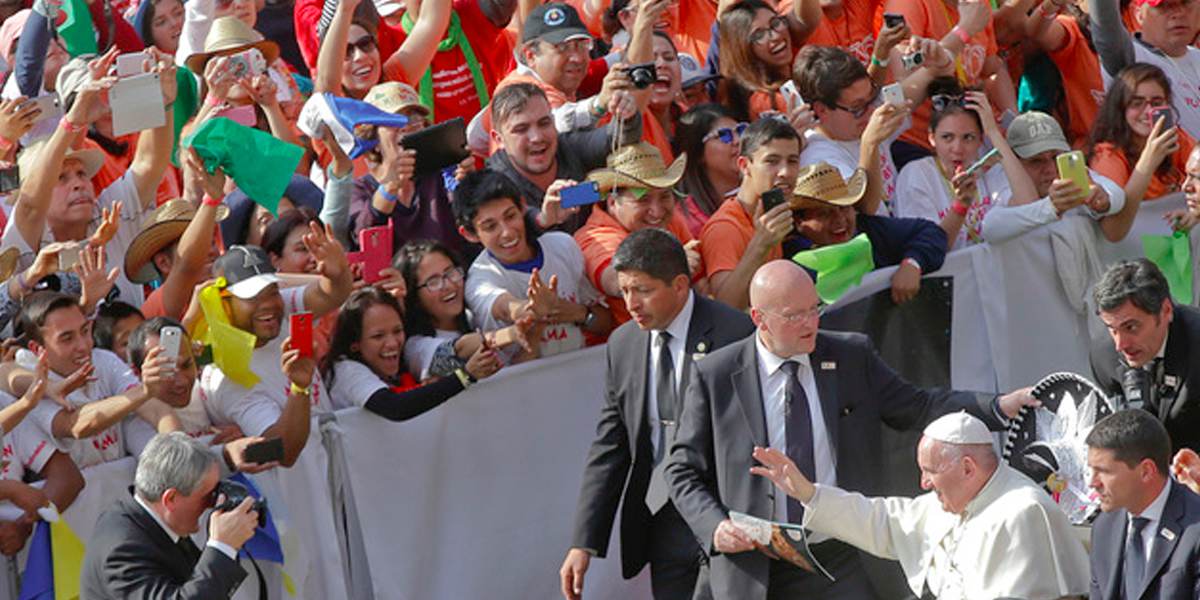 Pope Francis is cheered by youths as he arrives to the stadium in Morelia, Mexico, Tuesday, Feb. 16, 2016. Francis arrived in the heart of Mexico’s drug-trafficking country to offer words of encouragement to clergy trying to minister to a people tormented by the violence and gang warfare of the drug trade. (AP Photo/Gregorio Borgia)

EWTN (see original article here): In his visit to Morelia – one of Mexico’s most violent cities – Pope Francis had a strong message for the country’s youth: rather than allowing themselves to be used and trampled on, he told them to recognize their value and to place their hope in Jesus.

One of Mexico’s greatest treasures “is that it has a youthful face: its young people…you are the wealth of this land,” the Pope told them Feb. 16.

However, “I did not say the hope of this land, but its wealth,” he added.  This, he said, is because “you cannot live in hope, or look to the future if you do not first know how to value yourselves, if you do not feel that your life, your hands, your history, is worth the effort.”

Hope is born when a person is able to experience “that all is not lost,” he said, explaining that in order for this to happen, it’s necessary “to begin with yourself.”

Pope Francis traveled to the city of Morelia on his fourth full day of his Feb. 12-17 visit to Mexico. Located in the north central part of Mexico’s Michoacán state, Morelia is a hotbed of drug-related violence and organized crime that is greatly in need of the Pope’s message of peace.

Francis met with an estimated 50,000 young people after celebrating Mass for priests, religious and seminarians in Morelia’s Venustiano Carranza Stadium and visiting the city’s cathedral earlier that morning.

Before speaking, the Pope listened to testimonies from the youth, who recounted the difficulties of trying to build strong families amid a society overcome with corruption and violence, and which lacks the opportunity for adequate education and work.

In his address, Francis told the youth that the biggest threat to their hope are “those words which devalue you, which make you feel second-rate.”

Francis told the youth that hope is also threatened when they start to believe their value is measured by money, prestige and material possessions, while in the depths of their heart they believe they are really not worthy of either kindness or love.

However, the Pope also acknowledged that it’s hard to understand or feel valued “when you are continually exposed to the loss of friends or relatives at the hands of the drug trade, of drugs themselves, of criminal organizations that sow terror.”

It’s hard to feel like the wealth of the nation when there are no opportunities for decent work or study, he noted, adding that the difficulty is exacerbated when, as youth, “you feel that your rights are being trampled on” or that “you are used for selfish purposes, seduced by promises that end up being untrue,” which leads to extreme situations.

But despite all this, “I will never tire of saying, you are the wealth of Mexico,” Francis said, and clarified that he’s not saying this because he’s nice, but because he’s convinced that it’s the truth.

He said that Jesus Christ is the one who renews this hope in him, and that if we take the Lord’s hand and walk with him, we can move forward and begin again.

With Jesus, “we find the strength to say: it is a lie to believe that the only way to live, or to be young, is to entrust oneself to drug dealers or others who do nothing but sow destruction and death,” Pope Francis explained.

It’s Jesus Christ who shows us that poverty and exclusion are not the only paths available for young people, he said, adding that the Lord is the one who “refutes all attempts to render you useless or to be mere mercenaries of other people’s ambitions.”

Francis told the youth that when life seems too heavy and they feel like the world “is crashing down around you,” to run to Jesus and to embrace his Cross.

“Draw close to him and please, never let go of his hand; please, never leave him,” Francis pleaded, and asked the youth to not allow themselves to be excluded, devalued or treated like a commodity.

“You may not be able to have the latest car model at the door, you will not have pockets filled with money, but you will have something that no one can take away from you, which is the experience of being loved, embraced and accompanied,” he said.

The Pope closed telling the youth that they are being called by the Lord just as St. Juan Diego was, to build a shrine. This shrine, he said, is not a physical place, but rather a community and a nation.

“Being a community, a family, and knowing that we are citizens is one of the best antidotes to all that threatens us, because it makes us feel that we are a part of the great family of God,” he said.

He stressed that “Jesus would never ask us to be assassins; rather, he calls us to be disciples. He would never send us out to death, but rather everything in him speaks of life,” and encouraged the youth to remember that they are the wealth of their nation.

“And when you doubt this, look to Jesus, he who destroys all efforts to make you useless or mere instruments of other people’s ambitions.”

Shining light on our politics, faith, and culture.

ONE OF THE FOLLOWING

Catholic Bibles Have 7 More Books than Protestant Bibles. Here’s Why.

Do NOT follow this link or you will be banned from the site!