Will Obama’s Legacy Be The “Hateful Eight” Years of Change?

Now that more than eight years have passed since the days when Barack Obama made his meteoric rise in politics, it’s fair to say that he’s had his chance to deliver on his campaign promise of “change you can believe in.”  The effects of his Presidency will be felt for decades no doubt, and his legacy has yet to be written, but for this snapshot in time in September of 2016, what positive and meaningful change has Barack Obama delivered?

Even though I’m a conservative, and my candidate lost the 2008 election, I had high hopes that Barack Obama would indeed deliver on some of his promises of unity, transparency, peace, and prosperity. I was naive to his intentions of course, given his cloaked history, “no vote” record in Illinois as a State Senator, and his total placeholder status as a U.S. Senator; but all that aside, I hoped he could be a fresh, new, moderate, unifying voice after the turmoil experienced during George Bush’s term. That was not to be. That may have been the message, but I don’t think that was ever his intention. What an utter disappointment he’s proven to be. What a missed opportunity for him to shine, and what a missed blink in history in which we all could have benefitted.

As time passes, his legacy may shine brightly. I’m good with that, as we need to move forward. That said, if it were written today, “hateful eight” is the most fitting term that comes to my mind, when describing the past two terms in office that he’s delivered to our doorstep.

Given the divisiveness of Congress, has he acted as a unifying leader of leaders?  Given the riots in the streets by African Americans from Baltimore to Ferguson, to Seattle and beyond, has he delivered the racial unity he had us hoping for?  A majority of citizens are proud of the fact that his election made important history in being the first person of African American descent to take the seat of President of the United States. Historical significance aside, has he delivered the positive and meaningful change that he promised back then? Or were we all duped?

Here are some questions I ask myself, to gauge whether change has been for the best:

There are dozens more questions that I could add to this list, and you likely have a few dozen of your own to add, but my personal conclusion at this point in time is clear: The past eight years have devastated and divided us as a nation. The promise of “hope” was only a campaign slogan. The results today speak for themselves.  I pray now is that no matter who wins the next election (Clinton or Trump) that the President’s actual performance will rise above my expectations and fears.

By AZ Rep Jake Hoffman: Today AZ House Democrats abandoned their jobs in an attempt to cause a gov’t shutdown & prevent the House from doing the business of the people of Arizona.

Wow, did Charles Krauthammer just say the words, “unbelievably unconstitutional” on-air? Has it really come down to this?

You just gotta love this tweet. I have made it my quote of the day, from Independent Journal Review‘s Managing Editor, Kyle Becker:   I want everything in life paid for while taking no responsibility. I want to take offense and call you a “racist.” I want to be a Democrat. — IJReview Ed. (@kylenbecker)… 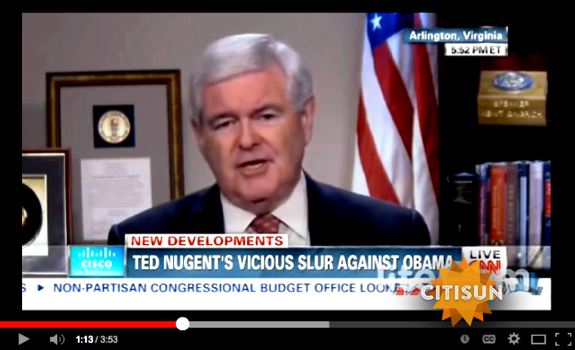 Thank you, Newt Gingrich, for once again pointing out the selective outrage displayed by CNN’s Wolf Blitzer, as the CNN  attempts time and time again to attach right-wing rocker Ted Nugent’s rhetoric to a Republican candidate.

A defiant and sobering declaration from a mother, speaking to a society that’s relentless in its determination to take our children. “You can’t have my kids.” You don’t get their health, their bodies, their ears, or their minds. They have been given to ME to raise and steward, and are mine to protect. They are not up for the taking.